Over The Moon crew provided the tents, sound and lighting for the Festival Tails area at Secret Garden Party 2010.  The festival had 25,000 people in attendance (10,000 more than last year) and the large growth didn’t harm its boutique credentials.  There were still a plethora of canvas unusual tents including lost of yurts, military marquees and Intents (Chai Wallahs had a fab set up again).

We took down a 6x8m Intent and a 6x6m military tent joining the two together to make a welcoming cave like dance pad for the selling of Festival Tails and to make a venue in the evening. 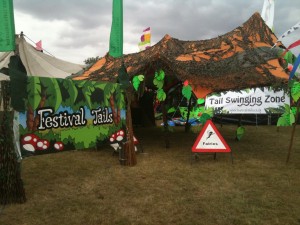 The atmosphere at the event  was great , some lovely people were met and lots of people came and chatted over the course of the weekend.  The weather played its part and the sun warmed the place, the occasional cloud kept it bearable and the rain stayed away.