3 Vintage Tents Joined Side By Side

The Pig Hotel in Pensford , Bath to provide them with a vintage green army tent to be the main venue for their African Safari theme event for 100 people.

This was the second time we had worked with this luxury hotel group, after working with their sister hotel in the New Forest. See this case study for more information.

The event was to commemorate a trip to 6 African countries by motorbike enthusiasts. Over The Moon were asked for a suitable size tent, a covered awning and director style canvas

The event was to commemorate a trip to 6 African countries by motorbike enthusiasts. Over The Moon were asked for a suitable size tent, a covered awning and director style canvas chairs.

Our core team has worked in outdoor events since 1996. We are fully trained in the rigging of our equipment, and have PRINCE2 accreditation to ensure good project management.

We work safely and smartly and provide Method Statements and Risk Assessments. We follow the latest Health & Safety industry standards.

THE PIG-near Bath – a 29 bedroom mellow country house perfectly situated near Bath and Bristol. This is a real get-away location, truly rural, with quintessentially English views of this undiscovered part of Somerset. Designed in the same shabby chic style that has become THE PIG’s signature, it features a greenhouse restaurant, a private room for dinner parties, 29 bedrooms and massage treatment rooms
Client Website

We worked closely with their events manager, Ellen Lane, who had some very specific requests for this job. They wanted the vintage green tents but they needed an internal space that was 20ft wider than the tents 20ft width. They also asked,

Will it be possible for the tents to be fixed up against our conservatory? This will also partly be over our concrete terrace, or do they need to be on grass?
1 x Tent with 30 Directors Chairs in a campfire style (our kadai fire bowl in the middle)
– 3 x Tents together to create the main dining area/stage
– 1 x Steel deck stage – 4m x 3.5m
– Coya Matting
– Plain Cavas Sides
– 2 x Heaters
– Edison bulbs for lighting
Just to confirm, how will the 2 tents be sealed in the middle? Will there be a way to stop water dripping down if the weather is bad?

The client had a particular look they wanted to achieve. This was the design proposal drawing we provided.

The rigging included a very tricky guttering design to handle three roof pitches porting rain down to an area that was now the middle of the combined tents.
The diagram above shows the grey rectangles which represented where we would rig additional dark green tarps to handle the run off. 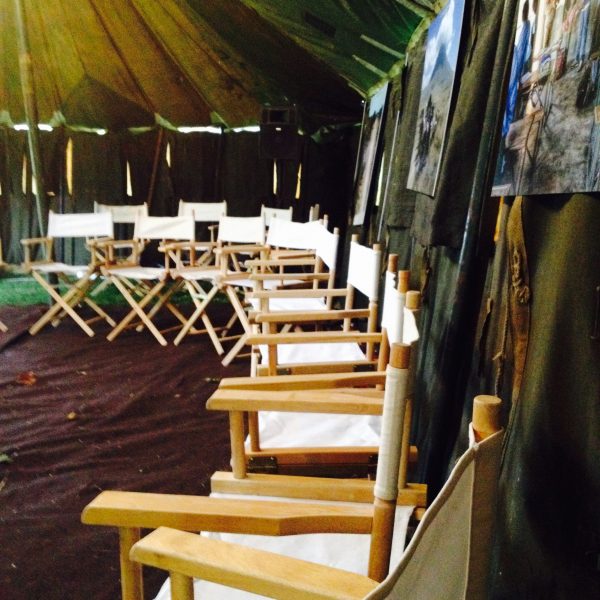 We like to boldly take tents where tents don’t go. This job entailed creating a custom guttering that sealed the tent join where the two roofs met.

This was a very challenging request for Over The Moon. The client wanted 3 large 20x54ft canvas tents joined together to create an internal space of 40x74ft. No walling was to be present and the roofs of the tents joined such that any rainfall was run off without any ingress into the tent.

We designed the proposed layout in SketchUp which allowed us to have informed discussions with the client, We also attended an on-site meeting to discuss the challenges and to measure up the site for accurate planning of the structure. The drawing below shows the T-shape of the bespoke drainage system we employed to handle the water run off from 3 roof slopes.

Additionally the job was to take place in November when there was a strong chance of bad weather and the hours of daylight are very short. The client also wanted the tent to attach to the side of the conservatory so that guests could step out of the hotel directly into the tent.

In a regular set up each of the tents would be staked down with a series of guy ropes around the perimeter of the tent. Shown below is a normal set up, adjacent tent’s sides and ropes facing each other

There were two challenges Over The Moon had to satisfy

The tent had to be a stable structure despite losing 242ft of guyed walling and side poles (50% of the total). Over The Moon designed a bespoke system to ensure the structure was safe and secure to use. This system handled attaching to the conservatory, erecting the tent on a paved area and keeping all three structures attached to each other. We trialled this bespoke set up at our depot prior to going live with the client.

The rainwater run off system was also a bespoke design that we trialled prior to installation. This system had to blend in and not affect the vintage shabby chic design requirement of the client. It had to attach to the roof without any internal ground support structure that could impede on the flow of people at the event.Over The Moon’s careful planning paid off. And boy did we need it. During the course of the set up the crew encountered storm Abigail blowing in winds gusting 40 mph and during the event storm Desmond arrived. The event passed off succesfully with no issues encountered with the performance of the tents.

We have the largest collection of canvas for Vintage Military Tent Hire in the UK. We can supply 15 seperate tents with upto 20 middle sections available.

These tents were manufactured in the UK from the forties until the eighties. We have many date and manufacturer stamped roof sections. 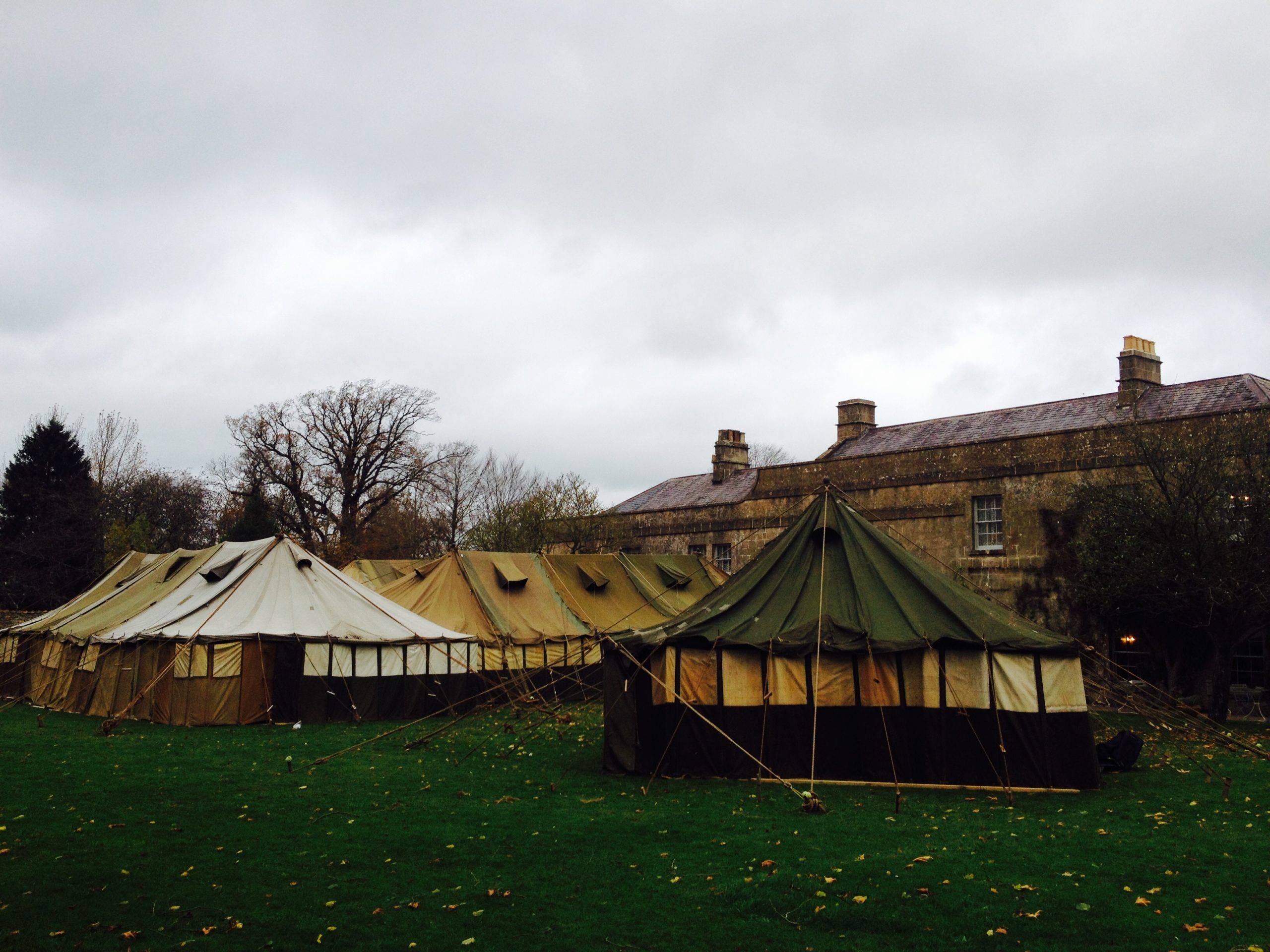 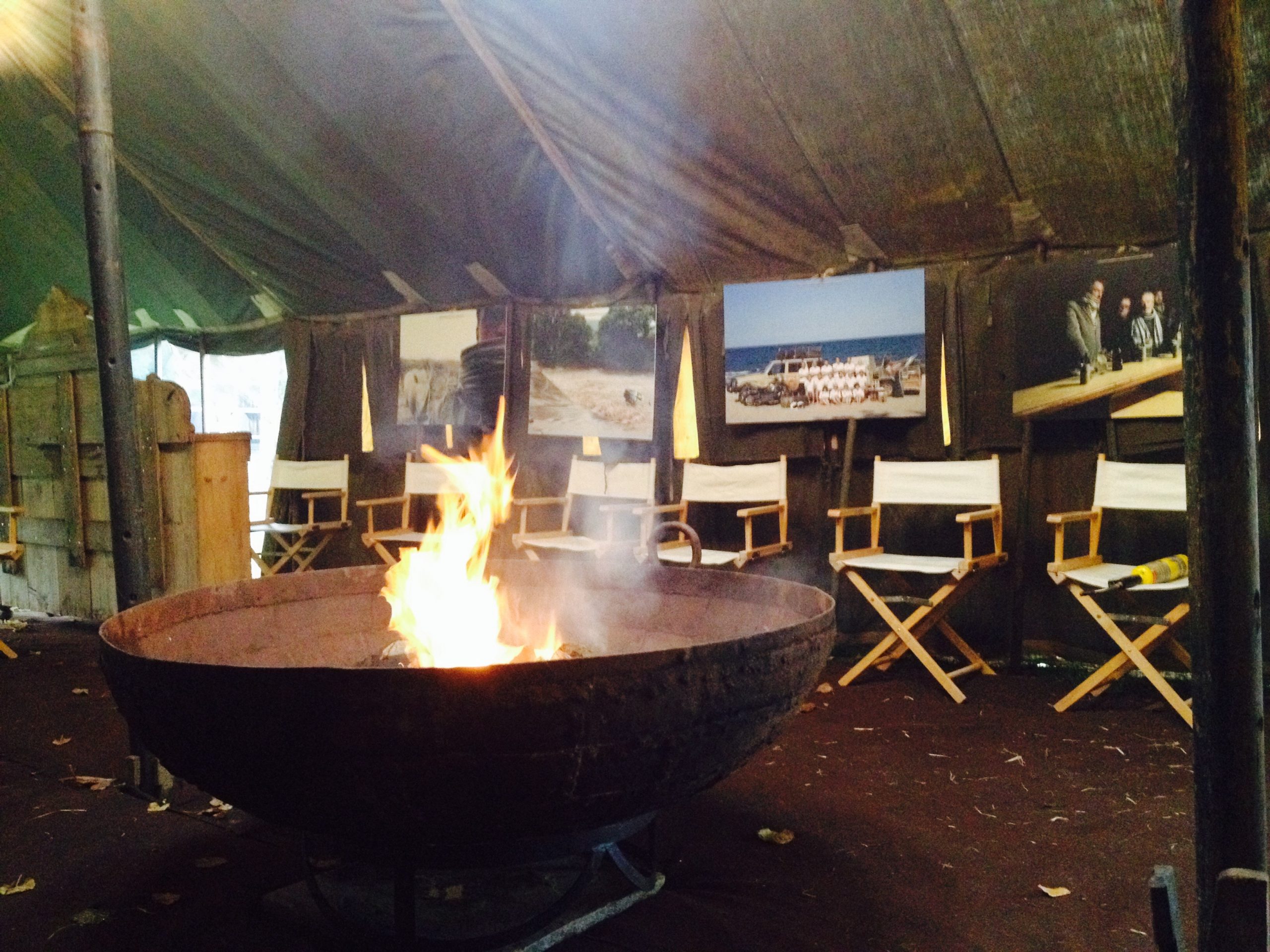 “As promised, here are some shots of the party. Thanks once again to you and your team for a great job.”