The Glastonbury Tatter & The Welly Mountain

Fay Rickwood, who features in the programme, posted about this entertaining yarn.  This is the blurb from the BBC site. Its a great programme.

Over the last forty years, music festivals have become a huge part of UK popular culture. But what happens when the crowds depart?

Murray Lachlan Young visits the site of the Glastonbury Festival to write a ballad about the armies of litter-pickers who, every year, turn a wasteland of Glasto-detritus back into a rural idyll within days of the final encore.

But for some, this is far more than a clean-up, it’s a way of life. The Alien Balladeer puts the litter-pickers centre-stage as they wander the scenes of other people’s revelry, creating their own story from what is left behind. What’s really going down in today’s disposable world? And just what is a Tatter? 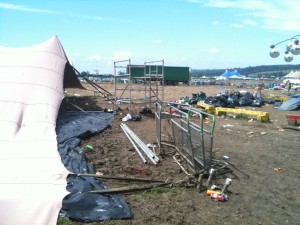 The aftermath of the Glade Lounge, Glasto 2011

Murray Lachlan Young is the Alien Balladeer and the music he writes about the Glastonbury litter pickers is very evocative of Woody Guthrie’s melodies and observations. I enjoyed the story told and the musings on the way the festival has changed.  We got introduced to the tatting philosophy when we worked at the Glastonbury Festival back in 2009. This programme features Michael Eavis and he tells of the amounts of nylon and metal that has monetary value when recycled. 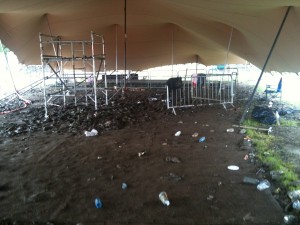 The tent before the tatters move in. Glasto 2011. It was like working at a rubbish tip. Delightful smell. Working at festivals is not all glamour.